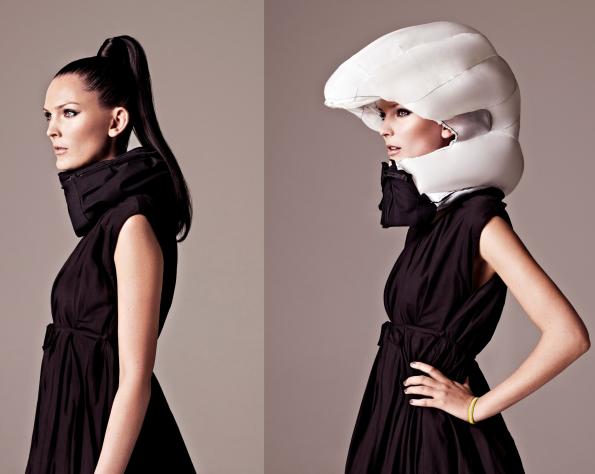 Airbags are no longer the privilege of car drivers. Urban cyclists now have the opportunity to enjoy the quality of Hövding, the airbag collar made by the company of the same name that protects your head and neck in an event of a crash. It began as a project for the master thesis of Anna Haupt and Terese Alstin and became an official product in 2011, with more than 100,000 sold. How does it work?

Hövding is deployed when the accelerometer registers a significant shift in speed. It takes just 0.1 seconds to deploy the airbag. To prevent it from accidentally deploying, simply make sure the button in front of the collar is set to ‘off’. When you go on the road, set it to ‘on’. In case of an accident, the airbag will deploy, coating your head like a giant, puffy helmet.

While head protection comes in the form of helmets, Hövding starts off as a collar, at least before deployment. You can choose different colors and styles, depending on your mood and fancy. Some users report that the collar is somewhat heavy, while others feel quite comfortable. Just make sure you check the equipment surrounding it regularly, as there can be some wear and tear over the course of its 5-year lifespan.

The manufacturer urges the clients to return the bags in case of deployment, as they are equipped with black boxes that store precious data. This data can be used for the improvement of Hövding.

All in all, there were three official tests done by acclaimed institutions. Folksam concluded that Hövding provides better shock absorption when compared to traditional helmets on the market. Stanford University also backed this product, saying that it provides better protection against concussion.

However, Hövding has faced its fair share of criticism. The French consumer group Que Choisir pointed out that the helmet did not do what it was supposed to when in an impact with a long narrow object, like a pole. Additionally, they were also concerned with the inflation time. Compared to the traditional airbag, Hövding inflated 50% slower, which is way below the safety standard for car airbags. It needs to be said, though, that their concerns were connected to Hövding 1.0, as opposed to 2.0, which is currently on the market and can allegedly inflate in 0.1 seconds.

The thing that makes most people twitch a little when discussing this revolutionary technology in road safety for cyclists is the price. It costs around 300 EUR, which is roughly $350. Though there are unconfirmed rumors that there are companies that may reimburse you for the deployed airbag, that is still a lot of money, especially for a single deployment. Then again, can one really put a price on safety?